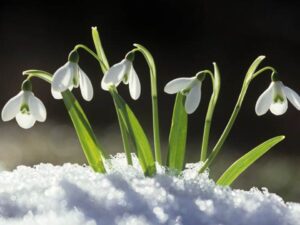 Snowdrops began blooming the day before we left for Puerto Rico. Oh, no. I was going to miss them. They, of course, like cold weather, but mid-March had been warmish. The snow had mostly melted. It seemed spring was going to arrive while we were in the tropics.

Oh, the mischievous mind. It makes a prediction and is very sure of itself. The mind forecasts the future and says “Of course, i’m right.” My emotions respond accordingly, “Oh, no!” “That’s not what i want.”

Did i notice that my mind predicted something of which it actually had no knowledge? Then the mind turned on itself, irritated with itself. A mental tug of war. A mental civil war–all dreamed up by the mind.

When we returned 12 days later, the snowdrops were still blooming. What was all that fuss about?